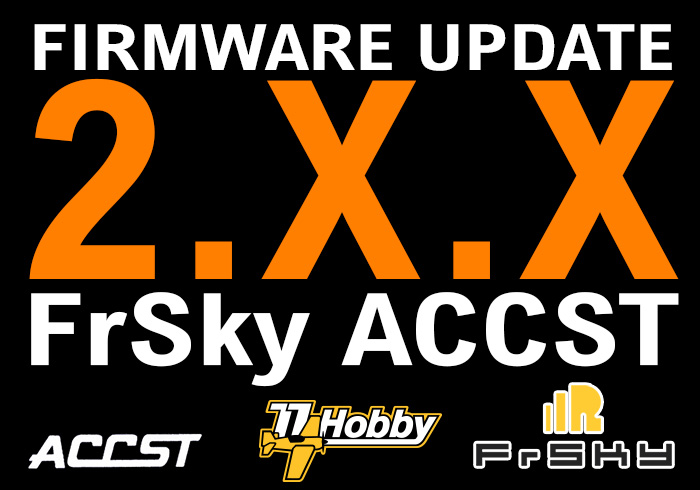 FrSky announced the release of an update to the FrSky ACCST D16 radio protocol. The upgrade is recommended to all users.

In this article we present the Polish translation of the original FrSky message, along with our commentary. The comment is presented based on additional information that we obtained from FrSky from other sources and as a result of our own analysis.

This article will be updated regularly, as long as new information is available.

Why was ACCST D16 v2 released?

The purpose of the upgrade is to increase the reliability and performance of the ACCST D16 (2.4GHz) protocol in difficult wireless environment. In such very specific conditions, with strong radio interference, the D16 v1 protocol may have lost one to few control frames.

The problem occurs extremely rarely, in specific conditions. If it occurs, it can be manifested by an almost imperceptible, very momentary vibration of one or two servos – this is a more frequent case of symptoms. Less often it can cause a temporary but already noticeable “freeze” of the current servo position (RC channels) and / or a change in the position of one random servo (RC channel), not necessarily even used in the model (therefore only temporary “freeze” of the channel position may be visible as a symptom ).

Symptoms occur in both geographical ACCST D16 variations, so both FCC and EU-LBT. However – due to the specificity of LBT – when the problem manifests itself it is much more visible in the EU-LBT firmware (it may be similar to the momentary activation of the failsafe mechanism in HOLD mode, so maintaining the last channel positions). For FCC firmware, the symptom is practically not noticeable (only slight vibrations or even only audible vibrations, which do not translate into any servo movements).

Symptoms appeared so extremely rarely, so that for many years this problem remained virtually unnoticed and had no impact on the vast majority of users. Due to such a rare manifestation of the problem, its diagnostics was extremely difficult, nevertheless the cause was finally isolated and FrSky prepared a firmware update – ACCST D16 v2.

A detailed report on the diagnosis and development of the patch by a test team from Germany, Austria, Switzerland and FrSky is available under the following link:

To date FrSky has released the D16 v2 firmware for the following products.

Soon FrSky will also publish updates for ACCESS transmitting modules (ISRM series transmitter modules built into i.e. Horus X10 / S Express, X-Lite S / Pro), which can also work in D16 mode. In this case, however, the update will only be relevant if ACCST D16 is actively used. If the ISRM transmitter module is used in ACCESS mode only, it is not necessary to update it due to the ACCST D16 v2 upgrade.

Which products are not affected?

The update also does not apply to receivers operating in the ACCESS protocol nor to any products of R9 series.

As new information becomes available, we will update the above lists on an ongoing basis.

Due to the improved validation of ACCST D16 v2 data transmission, and introduced additional security (encryption), the ACCST D16 v1 and v2 protocols are not compatible with each other. Therefore, the upgrade to ACCST D16 v2 should be carried out for all D16 receivers and transmitter modules, also build-in modules of Taranis and Horus radios (see the above lists).

Most likely newly distributed D16 receivers will be delivered with ACCST D16 v2 firmware only. This will also apply to the D16 mode on ACCESS transmitting modules.

How to upgrade firmware?

Firmware upgrade is a simple operation that is recommended to do as a normal maintenance regardless of the ACCST D16 v2 release.

Updating the firmware of FrSky receivers and transmitter modules (more generally FrSky Smart Port devices) is possible using a computer and a special programmer, or using any FrSky radio (with FrOS or OpenTX 2.1 or newer).

We have prepared the following articles to help with the upgrade:

The above articles are published in Polish only. Please use some on-line translator or search for other, English resources covering these topics.

The announcement about the ACCST D16 v2 upgrade appeared just recently (January 16, 2020), and the original FrSky message was quite laconic. We will make every effort to ensure that this article is a reliable and up to date source of information about the change introduced by ACCST D16 v2.

Buy me a coffee